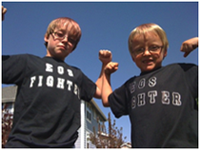 Chanda Organ and her husband face this reality daily. Their sons Carson, age 8, and Jake, age 10, were both diagnosed with eosinophilic esophagitis (EoE), a rare condition in which the wall of the esophagus becomes painfully inflamed as the body’s white blood cells mistakenly attack food as if it is a parasite. Carson was the first to be diagnosed with EoE at the age of two and five years later his older brother, Jake, was also diagnosed after dealing with severe episodes of stomach pain.

Carson and Jake show off their MIC-KEY* tubes 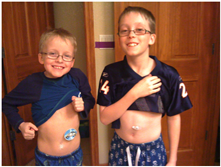 After several rounds of allergy testing, Jake tested positive for more than 40 food allergies. He was placed on a formula-only diet, and his pain improved, but he was having trouble drinking the 56 ounces of formula he needed each day. In May 2008 his doctors recommended a MIC-KEY* gastrostomy tube to help make it easier for him to ingest the formula in order to get the nutrients he needed each day while doctors addressed his food allergies.

Carson received his MIC-KEY* g-tube in February 2011 after doctors were unable to improve his symptoms through several elimination diets. While Carson doesn’t have as many food allergies he does have many of the same EoE triggers as his brother, and his doctors suspect that he is intolerant to artificial sweeteners. He will undergo further testing, while continuing to use the MIC-KEY* g-tube for sustenance.

Getting back onto the playing field
Though the prospect of a feeding tube was, “scary when Jake first got it,” Chanda now says taking care of the stoma site and changing the MIC-KEY* g-tube is as routine as washing your hair and similar to taking care of pierced ears. Since receiving the MIC-KEY* g-tube, neither boy has had any issues. Each morning, Jake and Carson do a feeding and pack formula to take to school.  Currently, each boy receives all of his nutrients through five daily feedings, as well as through overnight pump feeds.

Chanda says that the MIC-KEY* g-tube and the formula have made the process of introducing foods easier by enabling doctors to trial foods in order to build the boys a safe diet. Today, both boys’ EoE is in remission and they’re able to enjoy the same activities as their friends. Jake plays soccer and even wraps his MIC-KEY* g-tube with a bandage to play on his tackle football team.

Jake in his football gear
“It was hard for him to play when he didn’t feel good,” said Chanda. “But he came back and has played with the MIC-KEY* g-tube and it has been no problem. He covers it and doesn’t think twice. He has never

complained that his tube hurts and he plays basketball, goes on the Slip ‘n Slide, swims, rides bikes and rock climbs.”

Carson has also recently taken to the football field and Chanda says it helps him to see his brother being so active. He knows that having a MIC-KEY* g-tube won’t hold him back from participating in any activities.

Because there is no cure for EoE, controlling the symptoms through a safe diet is the goal for both Jake and Carson. Today, through their current treatment plans including the MIC-KEY* tube, both brothers’ EoE is well managed.

Jake and Carson are fighting food allergies and EOE